Sinus Milieus now available in Switzerland as well as in Germany

Describing, addressing, and serving often heterogeneous target groups as precisely as possible and is the goal and task of marketing. Be it product development, pricing, advertising creation, or service: Throughout the entire marketing process, separable target groups that are in themselves as homogeneous as possible are needed to differentiate products, prices, advertising, and sales channels in the best possible way to drive sales success.

However, not only companies, but also public and non-commercial institutions need segments or social groups to describe societies and their developments, for example in areas such as family, environment, media use, mobility, voting behaviour, and optimism about the future. It is the task of market and social research to identify these market segments or social groups and to illustrate and describe them in a way that is appealing to marketing. And for more than 40 years, one of the most successful models for target and social group segmentation has been the Sinus-Milieus, which group people with similar values and a comparable social situation into "groups of like-minded people". The Sinus-Milieus are integrated, among others, in the market media studies best for planning (b4p) by Gesellschaft für integrierte Kommunikationsforschung GIK and Axel Springer SE, the VuMa by ASS, RMS and ZDF, the Target Group Index (TGI) by Kantar as well as in the online pool of GfK Switzerland and the Nielsen Homescan-Panel.

While the German GapFish panel has already been milieu-located since December 2020, the Sinus Milieus are now also available in the Swiss GapFish panel. On behalf of the SINUS Institute and in cooperation with the dialogue marketing specialist KünzlerBachmann Directmarketing, GapFish conducted a comprehensive survey of n=2,000 Swiss people between the ages of 16 and 75, quota-representative according to age, gender, education, and canton. Within the scope of the survey, the Swiss Sinus-Milieus were also collected. This means that in Germany, and from now on also in Switzerland, panelists can be interviewed specifically according to Sinus-Milieu or recruited for advertising impact studies.

Further information about the study can be found here. Questions about the GapFish milieu-located panels can be answered by Jonathan Heinemann at Jonathan.Heinemann@GapFish.com.

We are delighted to share with you an important milestone in the development of our company: We are now part of Cint, which hosts the world’s largest consumer network for digital survey-based research.

Founded in 1998 in Stockholm, Sweden, Cint is a global software leader in digital insights gathering. The Cint platform automates the insights gathering process so that companies can gain access to insights faster with unparalleled scale. Cint’s Insight Exchange is made up of over 144 million engaged respondents across more than 130 countries. It has over 2,500 customers spread across 70 countries, including the world’s largest insights companies such as GfK, Kantar and Ipsos, and some of the fastest-growing technology-enabled insights companies such as SurveyMonkey, Zappi and Qualtrics. Cint was listed on Nasdaq Stockholm earlier this year and has a rapidly growing team across 14 global offices, including Stockholm, London, New York, Singapore, Tokyo and Sydney.

GapFish’s over 300 global customers and more than 40 employees came under the Cint umbrella by this transaction. The two companies will be unified under a single commercial organisation and integrated across other business functions based on a shared mission for customer success, approach to data quality and entrepreneurial culture. Cint will ensure that the GapFish offering maintains its market-leading position and will also continue to grow and expand with Cint’s global brand identity.

The news today, however, will not have any impact on GapFish’s day-to-day deliverables to Customers or Partners. It will be business as usual. In the long-term, GapFish and Cint will collectively explore and identify common synergies that make sense that would create enhanced value for all our customers and partners.

If you have any questions, please reach out to your GapFish representative. 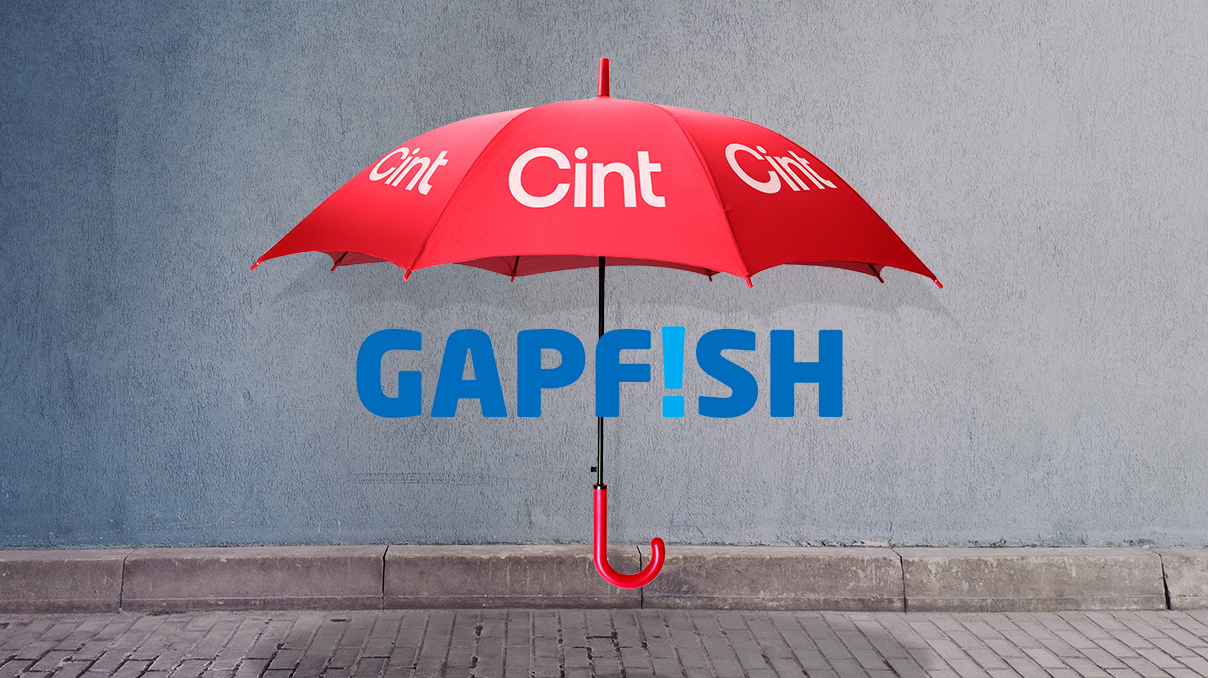 An industry giant in the making

The subject of climate protection is one of the most important topics in todays’ world. Right now, decisions are being made that will determine the future of the planet and future generations. It is more important than ever to question one's own choices and take action. That's why GapFish joined the Leaders for Climate Action (LfCA) launched by the digital scene in 2020, and had the company and our management, both professionally and privately, undergo an audit by ClimatePartner in order to be able to act in an emissions-neutral way.

ClimatePartner is an organization that supports companies in achieving different climate goals. For example, GapFish has changed travel policies and utility contracts. Furthermore, the company compensates the remaining climate footprint and has chosen to reforest German forests.

We would be pleased if our partners and friends in the market research industry would also be interested in supporting this approach and are happy to answer questions and provide contacts.

Germany is one of the most densely forested countries in the EU. But even here, forests are clearly feeling the effects of climate change: forest fires are destroying large areas, especially in the east. Drought and heat are weakening widespread tree species such as spruce, whose shallow roots do not reach deeper, waterlogged layers of soil. They are also more vulnerable to storms. Pests spread very quickly in weakened forests and cause particularly great damage.

Mixed forests, for example with oaks and pines, are more resistant to climate change. They tolerate heat and drought better and the risk of forest fires is lower. That's why GapFish has chosen to support Climate Partners and the reforestation and conversion of German forests.

You can find our Climate-ID tracking here: Climate ID

We are happy if our partners and friends in the market research industry also want to support this approach and are happy to answer questions and provide contacts.

If you are interested in becoming climate neutral yourself, you can find all the necessary information here: